Clinton, Trump and the War on Women

For many years Democrats have claimed that Republicans have been waging a "war on women." Republicans have angrily rejected both the metaphor and the reality behind it. With the ascendancy of Donald Trump as the leader of the Republican Party, the reality of the war on women can no longer be denied. I had thought that this election was like all the others I have lived through - a dispute over policy. But it is more, much more. It was only recently that I realized the true significance and scope of this election. It is no less than a revolution - a watershed in the history of the human race.

For me, an older straight white male who is more a less a policy nerd, the "war on women" stood for a number of legal doctrines and laws -- some that have a disproportionate impact on women such as minimum wage, collective bargaining, family leave, and universal health care, and others directly addressing gender equality such as equal pay, access to contraception, abortion rights, transgender rights, and marriage equality.

But after 16 months of of Donald Trump's aggressive assault on women's personhood and dignity I now believe that this election stands for so much more. It is nothing less than the culmination of a movement for full equality - a recognition of women's worth and independence. The New Yorker cover captures this beautifully: 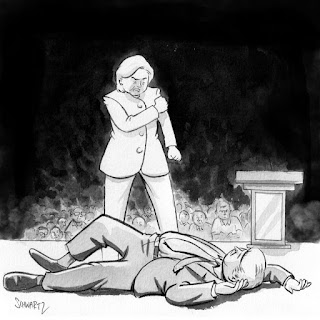 Hillary Clinton is a brilliant, hardworking woman, a person who is dedicated to protecting women, children, immigrants, racial and ethnic minorities, and persons with disabilities -- a public servant who has successfully fought for all of these groups her entire adult life.

Donald Trump has fought for no-one but himself his entire adult life. He has accumulated wealth by bilking people -- gamblers at his casinos, building contractors at his properties, and students at his phony "university." His personal life is abominable -- he brags about his affairs, and has abandoned two sets of wives and children. He rose to political fame by denying that our President was born in this country, by threatening to deport 12 million people, and by defaming all of his political opponents in the most vulgar and demeaning ways.

The defining moment of this campaign -- when was it? Trump's "grab her by the pussy" statement on the bus? His "nasty woman" comment at the debate? His threat that he will not concede the election to Clinton if he loses? For me, the defining moment came a few days ago at an academic conference when a woman I have known and admired for over 30 years came to the front of the audience and told everyone that when she was an undergraduate she was raped by a professor. After the program she told me, "Well, I'm 60 years old now, and I guess it was time to talk about it." Donald wasn't the rapist, but he sure brought back the memories. This is what we are really fighting against.

Sixteen Republican opponents -- governors, senators, and other well-known leaders -- could not defeat Trump. They all succumbed to his bullying and his lies. Why? Because they did not have the courage to stand up to him. They could not call him what he is -- a racist, xenophobic misogynist. They could not attack him on those grounds because there are so many Republican voters -- perhaps as many as 40% of the Republican Party - who love and admire Trump precisely because he is a racist, xenophobic misogynist. Even now most of the Republican leaders cannot bring themselves to vote against Trump, or even to speak out forcefully against him, not because they are bigots themselves, but because they do not want to alienate the bigoted voters whom they rely upon to get elected.

Now Clinton has Trump on the ropes and is about to finish him off. She will have done what the Republicans could not do. In so doing she will lead us all to victory in the War on Women.
Posted by Wilson Huhn at 10:56 PM