Not a News Flash: Greenhouse Gases Are Causing Global Warming

Here is some of the latest evidence regarding increases in the concentration of greenhouse gases in the atmosphere and global warming.


Here is an National Oceanic and Atmospheric Administration (NOAA) chart with the latest measurements of carbon dioxide at Mauna Loa, showing a steady 0.8% increase every year since 2008. Over the last year CO2 increased from 393.28 ppm (April 2011) to 396.18 ppm (April 2012): 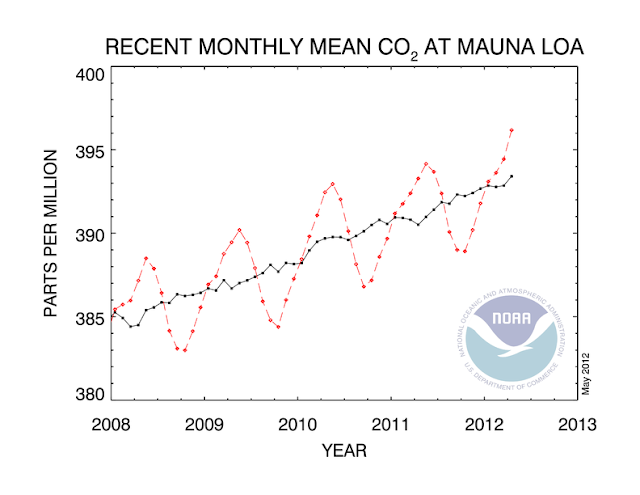 The good folks at NOAA not only track concentrations of carbon dioxide, but also nitrous oxide, methane, and chloroflourocarbons. Only the last of these is declining, thanks to a ban that was originally adopted in 1987 and which became fully effective in 2010.  Concentrations of carbon dioxide, nitrous oxide, and methane are still increasing, according to the NOAA Annual Greenhouse Gas Index (AGGI):

Is the earth getting warmer? You betcha! The National Climatic Data Center at NOAA has published the Global Climate Change Indicators showing that the earth's temperature has risen 1.4 degrees Fahrenheit over the last century. Here are five charts showing what you already know. 1) It's getting hotter; 2) The ocean temperature is rising; 3) The sea level is rising; 4) There's less snow cover; and 5) The glaciers are melting:

It takes a lot of psychological energy to deny the reality of what's happening to our beautiful planet. The problem will not go away just because some people find it inconsistent with their political agenda or threatening to their economic interests. Nor can it be wished away with magical thinking. It's time for our society to grow up and face the very real threat that global warming poses to our civilization.

We have built this civilization so that the people of each successive generation may enjoy their lives to the fullest extent. Let's not be the generation that selfishly deprives those who are to come of a comfortable, productive planet. Learn as much as you can about the danger posed by greenhouse gases and support policies that will avert that threat.