From War to Criminal Justice

The war against Iraq was an actual war. The war against al-Qaeda and the Taliban is an actual, ongoing war. However, the War on Terror is a metaphor, like the "War on Drugs" or the "War on Crime." The war against al-Qaeda is drawing to a close, and like most other wars in American history the United States will be victorious. Large-scale terrorism has proven to be a failure. Within the next few years, with the cooperation of the world community, we should return to treating terrorism as a crime.


The United States reports that Abu Yahya al-Libi, al-Qaeda's field commander in Pakistan, has been killed in a drone attack along with 14 other insurgents. Jim Miklaszewski and Robert Windrem, NBC News, Deputy al-Qaida leader killed in Pakistan drone strike, White House confirms (June 5, 2012). Their article contains this poster from Reuters showing that most of the senior al-Qaeda leadership has been eliminated: 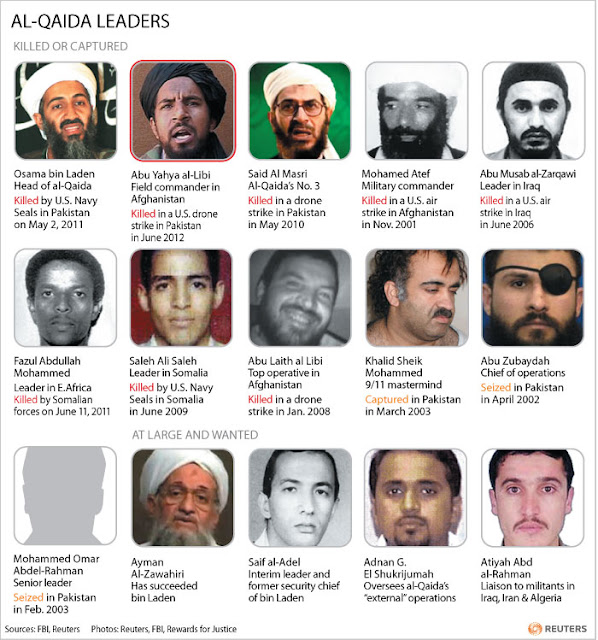 Al-Qaeda declared war on us and then attacked. They justified the massive slaughter of civilians on 9/11 as an act of war against us. Congress responded by enacting the Authorization for Use of Military Force, which did not militarize our country against terrorism generally, but rather against al-Qaeda and those who harbor and assist them - primarily the Taliban.

This is not the first time that the United States has had to deal with widespread terrorism. During the Revolution there were acts of terror between "patriots" and "loyalists," and following the war many thousands of loyalist families had to emigrate. During the Civil War certain areas of the country - most notably in Missouri and Tennessee - were riven by terrorist action and reprisal, and at the time this was treated both as criminal activity and as warfare. Once peace was restored, so too was the criminal justice system. No-one would contend that we were at war with terrorists such as Tim McVeigh and Terry Nichols. The criminal justice system is perfectly competent to contend with terrorism on this scale.

Other countries struggle with terrorists as well. Terrorism is spawned by revolutions; independence movements; struggles by indigenous peoples; exiles seeking to return to their homeland; economic classes who feel threatened or oppressed; and religious dissenters. In all cases we will decry the use of violence against civilians by members of the uprising, but as in Syria we may also oppose the use of violence against civilians to suppress genuine aspirations for reform. While we will often cooperate with other governments in identifying and capturing terrorists, it would normally not be necessary or appropriate for the United States to commit military forces to fighting terrorists operating against other countries.

The war against al-Qaeda, which is an actual and just war, will be over within a couple of years. There will not likely be a formal surrender nor is there likely to be an identifiable date on which the conflict will cease to be a war. But once al-Qaeda has been sufficiently reduced, with the assistance of other nations we can and should return to treating terrorism as a crime and not as an act of war.
Posted by Wilson Huhn at 9:56 AM