On April 4, 1865 -- twelve days before his death -- the 16th President landed on the banks of the James River near the shattered Tredegar Ironworks in Richmond, Virginia, and walked up the hill to the Confederate White House, accompanied by his disabled son Tad, a small platoon of soldiers, and thousands of cheering newly-freed slaves.

General Philip Sheridan's victory over General George Pickett at Five Forks on Saturday, April 1, 1865, threatened the last rail connection between Richmond, the capitol of the Confederacy, and the outside world, making it necessary for Commanding General Robert E. Lee to abandon Petersburg and the defenses around Richmond. On the morning of April 2 Lee telegraphed Confederate President Jefferson Davis:


I advise that all preparation be made for leaving Richmond tonight.

Davis and the Confederate government escaped south by rail and Lee's forces retreated west on foot. That evening the last remaining Confederate forces in Richmond set fire to all the commissaries and arsenals in the city as well as the ironworks and the ironclads moored in the harbor to keep them all from falling into Union hands. The city was rocked with explosions from ordnance and fires spread destroying much of the city and killing many as hungry mobs tried to rescue food from the burning and collapsing buildings.

The Union Army under General Godfrey Weitzel entered the city on the heels of the retreating Confederates and by the morning of April 3rd the American flag flew over the Confederate capitol building. Weitzel telegraphed Union General Ullyses S. Grant:


We took Richmond at 8:15 this morning. I captured many guns. The enemy left in great haste. The city is on fire in two places. Am making every effort to put it out. The people received us with enthusiastic expressions of joy.

Union soldiers extinguished the fires and saved the city.

Abraham Lincoln, who had lingered at City Point with General Grant hoping to see the end of the war, decided to visit Richmond.

Lincoln's craft, the River Queen, and its naval escort the Malvern were unable to navigate the cluttered waters of the James, and eventually he transferred to a skiff with his son, a guard of ten marines, and a few sailors who rowed them to shore. The Tregedar Ironworks was still smoking. 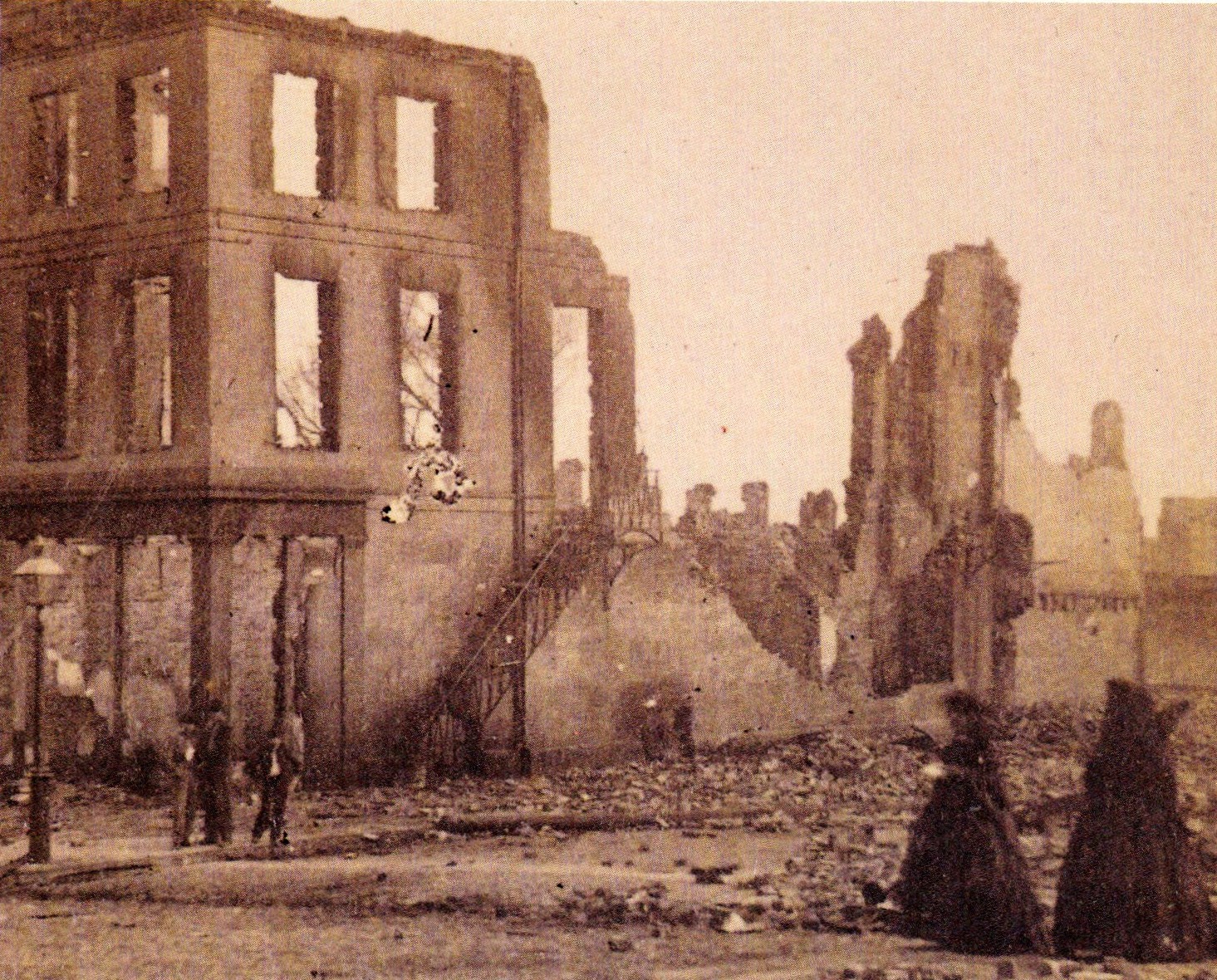 Lincoln set foot on Richmond soil on Tuesday, April 4, 1865. He was recognized by a handful of very newly-freed slaves down at the harbor. Word spread as fast as the fires had the day before, and as Lincoln, his son, and the small contingent of marines trudged up the hill to meet General Weitzel dozens, then hundreds, then thousands of ex-slaves gathered round them, cheering, and yelling, and weeping as the President appeared among them.

According to different accounts, one old man or a group of ex-slaves dropped to their knees and kissed his hand and the hem of his coat crying "Glory Hallelujah!" Lincoln motioned them to their feet and said: 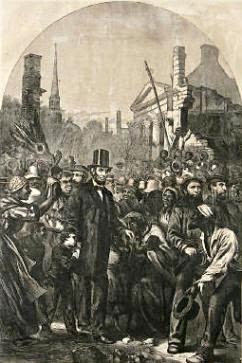 Don't kneel to me. You must kneel only to God, and thank him for your freedom.

Lincoln proceeded to the Confederate White House where he sat at Jefferson Davis' desk and conferred with the city's leaders. Later as he toured the devastated city with General Weitzel, Weitzel asked Lincoln how the army should deal with the southern people. Lincoln replied:

On April 8 Lee's army was surrounded at Appomatox Court House, a hundred miles west of Richmond, and Lee surrendered the Army of Northern Virginia the next day.

Washington celebrated. On April 11 Lincoln made his last speech. From the balcony of the White House he made not a victory speech but rather laid out his plan for a gentle and generous Reconstruction of the South, consistent with what he had told General Weitzel and with what he had said at the close of the Second Inaugural on March 4, 1865:


With malice toward none, with charity for all, with firmness in the right as God gives us to see the right, let us strive on to finish the work we are in, to bind up the nation's wounds, to care for him who shall have borne the battle and for his widow and orphan, to do all which may achieve and cherish a just and lasting peace among ourselves and with all nations.

At the close of his remarks from the balcony on April 11 Lincoln promised to address the southern people shortly:


In the present "situation," as the phrase goes, it may be my duty to make some new announcement to the people of the South. I am considering, and shall not fail to act, when satisfied that action will be proper.

Lincoln did not have the chance to address the southern people. He was shot on Good Friday, April 14, and died the following morning. Statue of President Abraham Lincoln and son Tad at Tredegar
Posted by Wilson Huhn at 11:20 AM