Economic conservatives decry the redistribution of wealth through tax and spending programs such as Social Security, Medicare, and the Affordable Care Act, and they have a point. Is it fair to rob Peter to pay Paul? They also believe that hard work should be rewarded, and in this I could not agree more. Hard work should be fairly rewarded. The problem is that they fail to apply these ideals in a consistent and principled manner to our present form of capitalism.

Arthur Brooks, the President of the American Enterprise Institute, defends capitalism as consistent with religious doctrines of faith, hope, and charity, claiming that by opening opportunities for all persons capitalism has raised entire populations out of poverty. And this is true. Our present economic system is fairer and more productive than both the aristocratic and slaveholding economic systems that preceded it.

But we must still guard against the principal defect of feudalism and slavery -- oligarchical systems where the labor of most individuals was converted to the benefit of a few. And make no mistake -- our system of capitalism is becoming less democratic, less efficient, and less fair. The reality is that more and more of our people's productive capacity benefits fewer and fewer people.

Here are the facts. More than half of all wealth in this country belongs to the top 3% of American households. 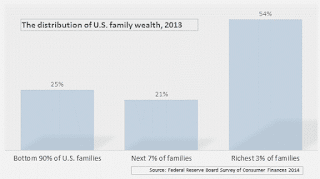 The top one-tenth of one percent of this country now owns as much as the bottom 90% of American families. And this problem is growing worse, as the following chart demonstrates: 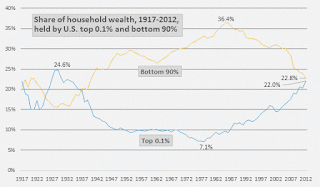 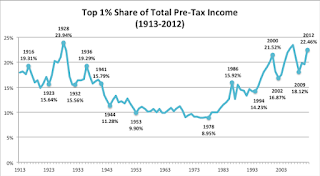 The fact is that income redistribution wouldn't be necessary if the distribution of income were fair to begin with. And if hard work should be rewarded, then why should business executives and hedge fund managers earn hundreds or thousands of times as much as the individuals who work hard to create that wealth?

Human nature is inherently selfish. Those with power will, if they can, take income and wealth from those who have earned it. And, like all people, those at the top regard their privileges as natural, even sacred, and they react with scorn and fury at those who challenge their right to consume the fruits of other people's labor.

What is the solution? There are many. Redistributive programs such as Social Security, Medicare, and the Affordable Care Act are inefficient, but because of the unequal distribution of wealth and income they are necessary. One obvious reform would be to tax income from capital at the same rate as income from labor. It is no coincidence that income inequality began to broaden when the capital gains rate was reduced. (To those who contend that lower rates for capital gains encourages investment, I would respond that lower rates on income earned from labor encourages work.) Hillary Clinton's proposal to encourage profit sharing through tax incentives is promising. Broader ownership of financial wealth -- perhaps through stock ownership for employees -- would help reverse the trend towards oligarchy. Finally, education should be free. All persons who are willing to work hard studying and learning should be given that opportunity. This will make us all wealthier. Universal education is truly the rising tide that will lift all boats.

The principle that Arthur Brooks and other conservatives contend for -- fair reward for hard work -- is shared by everyone. The problem is that Brooks and organizations like the AEI do not apply that principle in a principled fashion. Let's make capitalism work for all of us -- not just the top 1%.

Charts are from Inequality.org.
Posted by Wilson Huhn at 8:28 AM